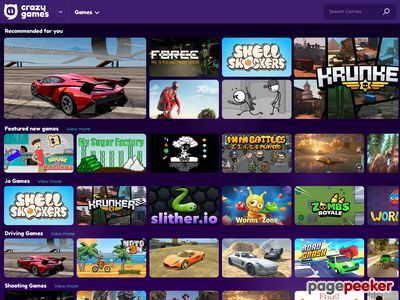 CrazyGames has over 7000 games in every genre imaginable. CrazyGames is a web-based game platform that offers some of the best free online games. CrazyGames was founded in 2013 and has since provided free online games. All of the games on CrazyGames are browser-based and can be played immediately without the need of any installations and downloads. CrazyGames is accessible via any device, including laptops, smartphones, and tablets. This means that you can start playing right away, whether you’re at home, school, or work! Furthermore, over 15 million people play games on CrazyGames each month, either alone in single player mode, with a friend in two player mode, or with people from all over the world in multiplayer mode.

CrazyGames offers some of the most popular gaming niches, such as:

There is a lot more on CrazyGames which might not be available on other gaming menu. It’s a perfect gaming menu for teenagers who are above 13.

Stay tuned with us if you want to know what the best games on CrazyGames are and much more about CrazyGames.