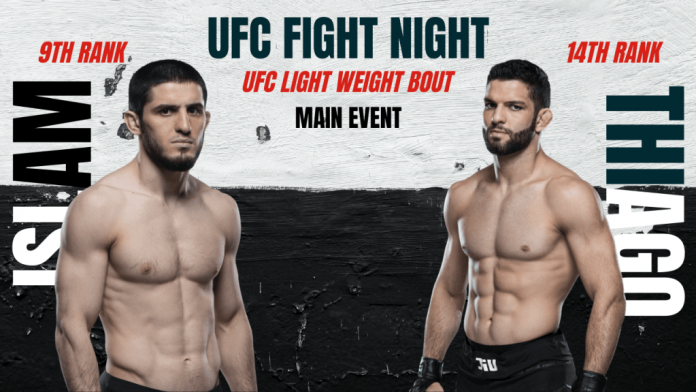 As lightweight contenders fighting through a range of different fighters, Islam Makhachev, the successor of Khabib Nurmagomedov, has finally found his opponent. In the stacked division of lightweights, every competition has been quite exciting and bring new energy to the table. Although Islam could not find the opponent of his choice, he found Thiago Moises, who has his last impressive through submission over Michael Johnson. Thiago is ranked 14 in the UFC lightweight rankings after beating Michael Johnson and looking forward to getting to the top 10. On the other side, mighty Islam Makhachev is looking for another fierce grappling match against a competent submission artist. So how does the competition stands for now?

The lightweight category has always been phenomenal in terms of different tools and skills the bring on the octagon. However, there are frequent skills to which we can commonly attribute a player such as a grappler, a Brazilian Ju-Jitsu, a submission artist, striker, wrestler etc. Ranking these players to the attributes only information that a person has shown such game in the octagon and can reveal such type of performance in future also. Summing up, a fighter’s game usually includes these skills.

What makes Dagestani fighters more competent and versatile is their adaptability to different scenarios and their toughness. Islam Makhachev has been called a well-rounded fighter by experts such as ‘Joe Rogan’. On a scale of 1 to 10, Islam will be ranked as 7 in striking, with an impressive one-punch knockout against veteran Brazilian Glesion Tibau. Islam looked promising against Arman Tsarukyan on the feet with his orthodox uniqueness. Islam is considered the best after Khabib Nurmagomedov’s lightweight division, such as grappling, wrestling, and takedowns. He will probably earn 9 out of 10. With a worthy and exciting submission game against Drew Dober, Islam has been innovative in submissions. Therefore, he earns a solid 8 out of 10 in grappling.

Being Brazilian, Thiago has an improved grappling and ground game. What makes him more challenging is his submissions are primarily on the second and third rounds when a fighter is sweating heavily. We award him 7 out of 10 in submission. Thiago has a strong striking and stand-up game; decision wins against Alexander Hernandez, Bobby Green, and Kurt Holobaugh represent his chess game tactics. He gets a solid 8 out of 10 on striking. We have not seen such a grappling game from him; however, being a BJJ, he would roll a trick out from his cuff on July 17th. He gets 6 out of 10 on grappling.

While talking to Bj Pen radio, Thiago was glad to get Islam Makhachev even though fighters were trying to evade him. Well, we need to see what happens in the octagon. The first main card for both competitors will highlight who intercede the expectation and find a way to defeat the opponent. Islam Makhachev looks like a favourite, and he will be famous on the card as well. Let’s see what does Thiago brings to the octagon. Islam Makhachev vs Thiago Moises will be great You can watch it live through the following link: